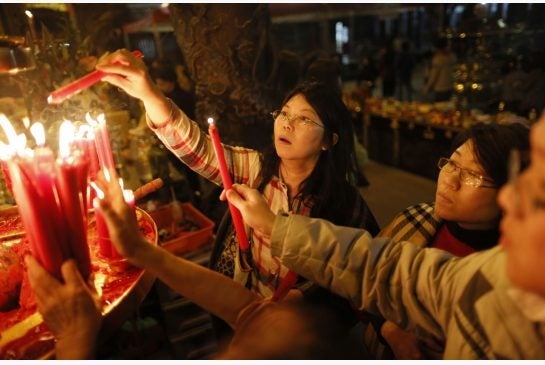 Devotees light candles on the eve of the Chinese new Year of the Sheep at the Lungshan Temple in Taipei, Taiwan on Wednesday.                  WALLY SANTANA / APDecades ago the Chinese New Year holiday, also known as Spring Festival, had little impact outside of China. But as the country gained outsized economic influence, the holiday, which has enormous cultural significance in the Chinese-speaking world, has become more prominent. This is how it ripples around the world.
1.FACTORY FREEZE
Chinese factories shut down for the holiday and then some, with hundreds of millions of migrant workers heading to their hometowns, part of the world’s largest mass movement of people.
In the lead up to the holiday, factories run flat out to fill orders before shutting. The holiday itself runs from Feb. 18 to 24 this year, but workers start setting off as much as two weeks earlier on packed trains and buses. After the holiday they may take the same amount of time to return, or not. The holiday is a prime occasion to switch jobs.
It all means an annual headache for retailers and importers overseas who rely on China. Shipping companies warn customers that China’s transport and logistics networks are at capacity and their shipments must be at ports two weeks ahead of the holiday to stand a chance of getting on a boat before the country shuts down. This year, shipping delays are compounded by a slowdown at U.S. West Coast ports.
2. QUIET MARKETS
Stock market trading shudders to a halt as mainland China shuts for an entire week and financial hubs such as Hong Kong and Singapore take a break as well, albeit shorter. Numerous other countries including South Korea and Vietnam also observe Lunar New Year holidays. Malaysia and Indonesia, with large Chinese minorities, take holidays too.
Trading volumes “drop off considerably” about three working days before the start of the holiday, said Andrew Sullivan, managing director at Haitong Securities in Hong Kong.
This year, Friday was “the last day that you can sell in Hong Kong and get your money before Chinese New Year” under trading settlement rules, he said. Foreign investors also tend to wind down trading in Asia as the holiday nears, Sullivan said.
3. GLOBAL SHOPPING
The festival is traditionally the most important time of the year for family reunions, but as China has become prosperous, an increasing number of wealthy Chinese are opting to travel abroad. That translates into big business for global luxury brands.
Many British department stores, for example, are pulling out all the stops to woo mainland Chinese shoppers. (Designer handbags, watches and jewelry can be up to 30 per cent cheaper in Europe because of high luxury taxes in China.)
Harrods is selling its own brand of red envelopes traditionally used to give “lai see,” or lucky money. Selfridges and luxury brand Burberry are each offering cards and envelopes personalized with Chinese calligraphy. Designer label Vivienne Westwood has launched a collectors’ necklace featuring a sheep pendant. Shoppers at Fortnum & Mason paying with UnionPay cards — China’s homegrown payment network — will get bonus gifts.
Chinese spending in Britain last February jumped 23 per cent over the same month in 2012, said Gordon Clark, manager at Global Blue, a Switzerland-based firm that tracks luxury retail spending worldwide. Chinese shoppers spend an average $1,420 per transaction in Britain each February, mostly on luxury jewelry, watches and designer clothes.
4. ECONOMIC DISTORTION
Because the Lunar New Year never falls on the same date, it plays havoc with Chinese economic data at the start of the year. Economists are cautious not to read too much into figures from January or February, and prefer to wait until March to see the trends lest they make an incorrect interpretation of the world’s second-biggest economy.
Last year, the holiday started on the last day of January which meant activity was more compressed as factories rushed to get their orders out the door. This year, the holiday falls about two and half weeks later, so factories had more time to work on orders. The result is that this year’s January trade data, for example, was artificially weak.
“We always warn about the CNY effect and the risk of reading too much into these figures at this time of year,” said Julian Evans-Pritchard of Capital Economics. “This affects most of the data out of China in January and February as well headline export growth in countries such as Korea that are heavily dependent on the Chinese market.”
5. CHINESE ABROAD
The holiday is celebrated by Chinese and other South Asian communities around the world in cities such as Toronto and Vancouver.
In San Francisco, where about one in five residents is of Chinese descent, the celebration is stretched over a few weeks, with fairs, beauty queens, bazaars, lion dances and deafening firecrackers in Chinatown. The festivities culminate in the San Francisco Chinatown Chinese New Year Parade, complete with feisty 82-metres dragon. It’s such a big deal that schools close for the holiday.
The festivities have also embraced foreign culture. For example, the traditional red envelopes, usually decorated with gold Chinese letters, are sold by Chinatown merchants with pictures of Pokemon and Disney characters.
6. HOLIDAY SURPRISE
Just because it’s a holiday doesn’t mean there won’t be any major surprises. Chinese officials are notorious for releasing big news during important holidays, unexpected announcements that “hit you with your pants down unprepared,” said Francis Lun, CEO of GEO Securities. The timing may be an attempt to reduce the impact on financial markets, or for the more skeptical, to bury bad news. In 2011, the central bank raised interest rates at the tail end of Chinese New Year.
blog comments powered by Disqus